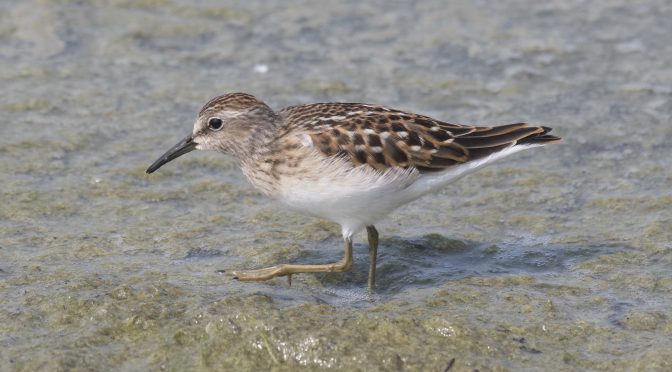 Every day at Presqu’ile is a good day

Presqu’ile Provincial Park is one of my favourite wildlife spots. It features an incredible range of habitat for such a small place: a sheltered bay loved by migrating ducks, extensive marshes, wet woods, sand dunes and climax forest. And of course, beautiful sand beaches, which attract swimmers and sun-worshippers, but much more importantly, migrating shorebirds.

So when the I saw that Jon Ruddy was leading a trip to Presqu’ile in prime shorebird season, I didn’t need much convincing. And thus it came to pass that on Sunday the 26th we assembled at the Park gates for a spot of birding.

The first step in the Presqu’ile stations of the cross is a visit to the beaches. If shorebirds are present they will be somewhere along the 2.5km of beach, so (quelle surprise!) the best approach is to start scanning at one end and then work one’s way along to the other. We started at Beach 1 with a good look at the gull flock. The usual suspects were around – an assortment of Herring and Ring-billed Gulls and Caspian Terns – with singles of Bonaparte’s Gull and Common Tern. We were admiring Ring-bill youngsters in their juvenile plumages when the first “peeps”[2] came through. Baird’s Sandpipers are normally seen in the autumn in ones and twos, but on this day they were darting about in groups of ten or more.

Not surprisingly, all the Baird’s we saw that day were juveniles. Like most shorebirds, the adults migrate once their chicks are fledged, so Mom and Pop Baird’s are already long gone on their way to South America before the young are strong and fat enough to make the trip. So let’s put that in perspective: millions of shorebirds are born every year in the High Arctic, and every year they find their way to their wintering grounds without any experienced birds to guide them. It’s one of those bird mysteries that we really don’t understand yet.

In any case the Baird’s flocks were headed south, so we elected to move down to Owen Point at the south end of the beach. This proved to be astute, as the Point was hopping.  A thick mat of decomposing algae was home to hordes of flies and other bug creatures, and over 300 assorted shorebirds were feasting on them.

A bit of shorebird mania ensued as we tallied up the species. The common peeps were well represented: Least Sandpiper (50), Semipalmated Sandpiper (200) and Semipalmated Plover (35). About 25 Baird’s Sandpiper headed up the Less Common category, followed by ten Sanderling, four Black-bellied Plover and a lone White-rumped Sandpiper. Then there were a few in the Fairly-Unusual-for-Presqu’ile category: a lone Red Knot and at least two Ruddy Turnstone.

After ogling and photographing these beauties we might well have called it a day, but our fearless leader had the feeling that in such a large crowd of peeps there might be something special. So he set out to scope each one of those 300+ birds. By now the hot sun was beating down and we were feeling a bit parched, but Jon is a bird finder extraordinaire so we continued to take photos and scan the horizon while he did his thing.

After a bit we noted a bit of contained excitement in his voice. As he progressed from “Hmmm” to “It could be” to “I think it looks good” we all started to discretely move a bit closer in. Local bird guru Bill Gilmour was on the site, and the tension was heightened when Jon called him over. He scoped the bird for a minute then said “it looks good to me”. And thus the bird of the day was revealed.

Western Sandpiper is, like it says on the tin, a denizen of the west coast.  It breeds in Alaska and winters on the Pacific coast of the USA and both coasts of Central America. In Ontario it is listed as a Rare and Accidental migrant. This bird was way off course. Much to our collective delight I might add. It was a “lifer” (a life bird) for all of us including Jon.

After we had all had a good long look, we did our birding duty and got the word out on the jungle telegraph: the Ontbirds listserv and the Ontario Rare Bird Alert page. Then it was off to eat our picnic lunches and rehydrate.

As we tramped about the Park, one of our number, Gillian M, had been calmly naming off butterfly and odonate[3] species. Gillian is the Jon Ruddy of the insect world, and in between bird sightings she introduced us to a variety of interesting bugs.

Which was a good thing, as aside from the beaches Presqu’ile turned out to be a Bird-free zone. A lot of walking around and staring into trees and bushes yielded a paltry number of passerines,[4] though at least the pair of Olive-sided Flycatchers we found were lifers for one of the crew.

Eventually we called off the hunt and consoled ourselves with ice cream from the Park Store.

So it seems the big days of Passerine migration are still to come. But a lifer, three new birds for the year list and the chance to commune with a big flock of shorebirds made for a really good day of birding.

[1] With apologies to Wallace and Gromit.

[2] Peeps is the collective term for a number of species of small sandpipers of the Calidris family that tend to hang around together.

[3] Odonates – a predatory insect of the order Odonata; a dragonfly or damselfly.

[4] Passerine – any bird of the order Passeriformes, which includes more than half of all bird species. Sometimes known as perching birds or – less accurately – as songbirds.