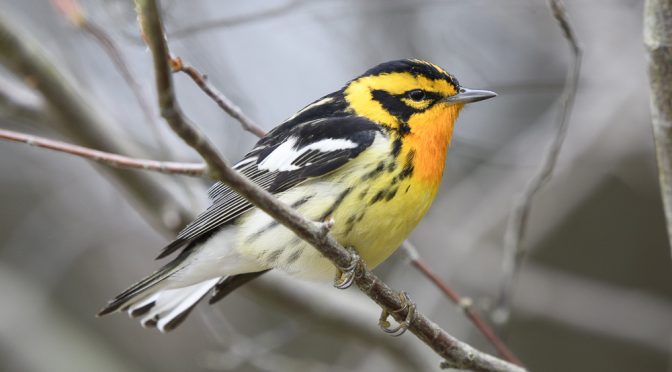 In days of yore the Kingston Field Naturalists (KFN) used to conduct field trips to Point Pelee, the birding mecca of southwestern Ontario. Eventually interest waned and these trips were discontinued, but with a new generation of keen birders entering our ranks the time seemed right to renew this tradition. And so it was that on the 6th of May eight members headed down the long road to Leamington in search of spring migrants.

By the time we arrived it was late afternoon, so there were only a couple of hours of birding time available before we had to check into hotels and find dinner. We decided to patrol the Woodland Trail and amid the usual suspects we managed to find five warbler species, including good views of Blue-winged Warbler. Just a taste of things to come! We also saw the first of approximately one zillion Red-breasted Nuthatches we were to find during the week – these normally northern forest specialists were everywhere.

Tuesday was a dose of the full-on Pelee experience. After the obligatory 05:30 breakfast at Tim Horton’s, we plunged directly into the vortex, birding for eleven hours with only brief pauses for refreshments. The weather was damp, windy and cool, but the birds were cooperative. We had 49 species before our coffee break, with star billing going to Red-headed Woodpecker, Pine Siskin, Grasshopper Sparrow and thirteen warbler species. The next foray added Black-crowned Night Heron, three species of wren, Veery, three thrushes (Swainson’s, Hermit and Wood) and the first Scarlet Tanagers of the trip.

The Friends of Point Pelee NP run a lunch and coffee stand at the Visitor Centre during the birding festival, so we didn’t have to leave the park to find food. After a short pause we were back on the trail, finding an array of new birds including the much sought-after Prothonotary Warbler. Richard revealed a heretofore hidden talent for finding creeping ground birds, so we had the first of many good views of Ovenbirds. And another 22 Red-breasted Nuthatches. Then it was off to Leamington for an abstemious and healthy dinner of ribs, fried chicken and local beer at Ray’s Ribhouse. 😉

On Wednesday we divided the group, with some people opting to stay in the Pelee area while the majority went east to explore Rondeau Provincial Park. For the latter group the first stop was the Keith Maclean Conservation Area where a Glossy Ibis had been spotted the previous evening. Alas the ibis was not visible so we scooped up a few trip birds (Osprey, Sora, Northern Shoveler) and continued on to Rondeau.

A White-winged Dove has been summering around Rondeau for a couple of years so that seemed like a good place to start. We went to the likely spot and started looking around. The homeowner came out and said that the dove had been there a few minutes ago but had flown off in “that direction”. We looked towards “that direction” and there was the dove, showing nicely. It even gave us a few examples of its call before moving off. So there was a gift-wrapped start to the day, and made up for the missing ibis.

Beyond that Rondeau did not have many new birds to offer. The birds that were there were uncommonly showy, so we took the opportunity of close-up shots of Palm and Cape May warblers, Blue-headed Vireos and Swainson’s Thrush. But we decided to move on, hoping that the legendary Blenheim Sewage Lagoons would have something in store.

The wind was howling strongly when we arrived at Blenheim, so it looked like we would make a brief stop and then retreat to the cars. Once we topped the berm, though, it was clear that we had work to do. A flock of about 400 swallows were swarming low over the ponds: mostly Tree Swallows but we found a smattering of Northern Rough-winged and Bank Swallows in the mob as well as a few Purple Martins and a lone Cliff Swallow. A pair of Black Terns were also playing but they flew off before we could get a photo.

Scoping across the water we picked out Ruddy Ducks, Gadwall and many Bufflehead, and deep in the murk I spotted a small active grebe that looked interesting. After a careful study and comparison with a Horned Grebe in the next pond we concluded that it was indeed an Eared Grebe – a very tough bird to find in Southern Ontario. This was one of the best birds of the trip, and once our E-bird checklist was published it created a minor stampede, with over 40 birders trekking to the lagoons to see it over the next few days.

A thorough search of the lagoon complex turned up a few new additions for our list, including a Forster’s Tern. I will gloss over the fact that “certain members of the party” cast doubt on my identification of this bird, and then recanted after checking their reference books. Heavy is the head that wears the crown of KFN trip leader.

Thursday saw another painfully early breakfast and another trip to Point Pelee. Little did we know what lay in store.

To our credit we made a clever decision in choosing to visit Pelee in early May, and we were resolute in deciding to visit the Tip that morning even though the weather was gloomy with predictions of thundershowers. But most of all we were very lucky, because for about an hour that morning we experienced an event that none of those present will ever forget.

We stood at the tip with a hundred other observers as wave after wave of birds worked down to the Tip and then flew off bound for Ohio. Over the period of an hour approximately 4,500 warblers passed by, as well as about 1,000 Baltimore Orioles, 500 Scarlet Tanagers, many hundreds of Red-winged Blackbirds and smaller numbers of a dozen other species. The warblers were mostly working their way along the scrub trying to get a last meal before the flight, so we had great close views them.

The biggest problem was deciding where to look next. Photographers experienced the odd phenomenon of having to move away from the birds as many were too close for our long lenses to focus on. It was an amazing experience – I overheard a gentleman saying that he had been coming to Pelee in May for 41 years and had never seen anything like it.

And then it was over, and in a semi-stunned state we headed back to the Visitor Centre to relive the experience over coffee. By rights the remainder of the day should have been an anticlimax, but there was more birding goodness to come. A stroll down the trails of Tilden Woods allowed us to pile more warblers, vireos and sparrows onto our trip list. A typically skulking Mourning Warbler drew a crowd, as did a very confiding Kentucky Warbler. Getting away from these mob scenes we found a quiet corner of the trail overlooking a glade and in short order had great views of Canada, Orange-crowned and Wilson’s Warblers as well as a few of their more common cousins. We even found the lone Grey-cheeked Thrush of the trip.

Lunch arrived amid buckets of rain so we moped about the Visitor Centre for awhile before heading out into the elements. Birding was a bit slow but we did manage to find a Hooded Warbler for our troubles. Nancy decided to take a different path, going back to Tilden Woods with the avowed intention of sitting on a bench and waiting to see a cuckoo. The birding gods looked favourably upon her, and I got a text saying that she had found one – and a Yellow-billed one at that.

We agreed to reconvene at Hillman Marsh to close out the day. Usually a great spot for shorebirds, the Marsh was a bit sparse on the day, but we did manage to see a large flock of Short-billed Dowitchers and a lone Sanderling, and added Pine to our already very long warbler list. After an amazing day with close to 100 species seen we treated ourselves to a fish feast and a few well-deserved refreshments.

The plan called for us to move on to Long Point on Friday, though John decided to stay on in Pelee for an additional day (and was rewarded with good views of a Cerulean Warbler). The main group arrived at Long Point Bird Observatory at about 11:00, and we proceeded to thoroughly scour the famous Old Cut – a small patch of trees and scrub that can hold an amazing number of migrants. By now it was getting difficult to add new birds to the trip list but we were able to find a Green Heron, and had stunning views of a male Hooded Warbler and some very close looks at the plain and dowdy Blackburnian Warbler. In the afternoon we found a few Sandhill Cranes and an American Bittern, and then visited the Long Point Provincial Park, where we bagged a cool 46 bird species in about an hour.

By now, after a hard four days of birding in the cold and wet, we were starting to flag a bit, so we actually knocked off a bit early and returned to Tillsonburg for a feast.

The original plan for Saturday was to make the long trek up to the Carden Alvar. This would have added about five hours of driving and we had seen many of the target birds, so we decided instead to return to base with a short excursion to Presqu’ile Provincial Park enroute. Presqu’ile is normally an excellent site for shorebirds but we arrived to find most of the beach area inundated. We forged on through almost knee-deep water but there was not much bird action. Great Egret at long range was a good addition to the list, and we had a very obliging Solitary Sandpiper at the Lighthouse parking lot, but overall there was not much to be seen. Richard and Dianne had to leave early, but our spirits were lifted when we got a text stating that they had found the continuing Cattle Egret on Huff Road. All other plans were dropped as we sped off to see this rarity, and our good luck continued as it was still in place when we got there.

The egret was bird species #149 for the trip – not bad at all for five-and-a-bit days of birding. We found 27 species of warbler, most of the available ducks, all the expected vireos and a host of other interesting birds. It was hard slogging at times, but the company was good and overall I found the trip very rewarding. Stay tuned for a repeat performance next year!

All images, unless noted, are copyright of Anthony Kaduck, and may not be reproduced without permission.