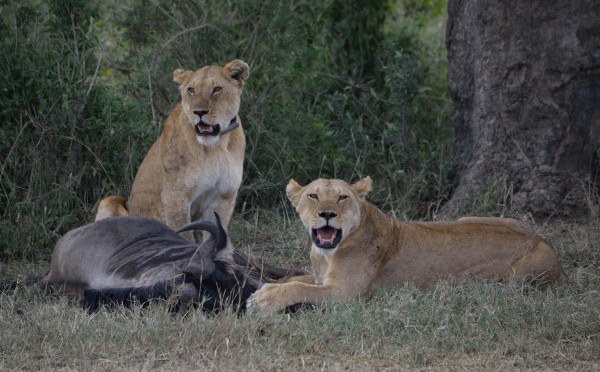 I have been (finally) going through our pictures from the Tanzania trip and I though you loyal readers might find these ones interesting. We were fortunate enough to see a lion attack play out right in front of us, thanks to some expert positioning of the vehicle by our driver/guide Fredrick Kissenga.

The Stage is Set

We had been at a watering hole in Serengeti National Park watching a herd of wildebeest and zebra drink, and were just ready to leave when a park ranger pointed urgently to the side of our vehicle. Looking out we saw simba creeping up a gully no more than three metres from the vehicle.

As the first lion was creeping into an attack position, a second lion suddenly charged into the herd. It was not clear whether this was part of the plan or just a young lion being overly excited, but the result was instant chaos, as every animal in the herd tried to bolt.

The suddenness of the attack was the undoing of the herd. A single wildebeest has a fair chance of outrunning a lion, but with the animals trying to run in all directions inevitably some were forced to stop and change direction, and this was the lions’ chance.

After the wildebeest was killed the animals rested for a long time, breathing heavily. The physical effort of sprinting into the herd, seizing a full-grown wildebeest and dragging it to the ground was immense.

We learned later that this same pair killed two more wildebeest that day. In the afternoon the rest of the pride arrived and they feasted.

Lions are very territorial so they can’t just follow the wildebeest herds around. When the annual migration passes through their territory they need to feast and feed their cubs.

To avoid being decimated by predators (which also include leopards and hyenas) the strategy that the wildebeest have evolved is to swamp the ecosystem by mass calving. On the Serengeti about 10,000 calves are born every day for about three weeks. The predators can take some of these calves but enough survive that the herd is not seriously threatened. Moreover the wildebeest calf, unlike those of most ungulates, is able to run at full speed within a few minutes of being born.

While we felt sorry for the victim, the whole experience was intensely interesting and one of the highlights of our trip.

We traveled with Worldwide Quest tours from Toronto. The local tour operator was Predators Safari Club, who provided us top quality vehicles and two excellent driver/guides, Fredrick Kissenga and Joseph Meducane. Both are organizations highly recommended.

One thought on “Lion Attack!”