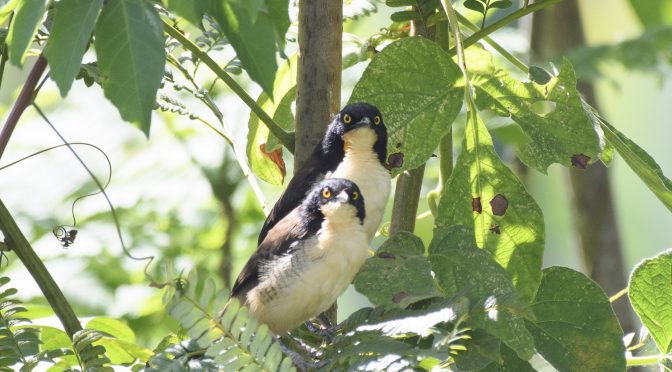 I have been posting a bird of the day on Facebook, aiming to give friends something attractive to look at amidst the gloom of Covid news. Today’s bird is the Black-capped Donacobius, a rather charismatic bird that resides primarily in wetlands of the Amazon and Orinoco basins.

Explaining why this bird came to mind involves delving a bit into the obsessive world of bird listing, which I concluded was a bit excessive for the lighthearted intent of a social media post. So for those who might want to increase their knowledge of the eccentric subculture of birding, here is the story.

Birders, if they have bitten hard enough on the hook, tend eventually to develop into listers. The most common manifestation is the life list, which is just what it says on the tin: a list of all the birds one has seen. Deeper forms of the obsession manifest themselves in year lists, month lists, and day lists, not to mention country lists, province or state lists, and so on.

I remember in my early days heading out to Somerset in hopes of seeing a Short-eared Owl that had been hanging around a certain field. I arrive at the place and within a few minutes the beast appeared. It was a life bird for me and I was happily watching it for a while when I noticed two other birders down the road who seemed somewhat discontented. I went over to tell them that the views were better from my vantage point, but they were not mollified. It emerged that they needed the bird for their Oxfordshire year list but it was stubbornly staying on the Somerset side of the fence.

That seemed quite mad to me at the time, but I must come clean and admit that I now have county lists for all of the nearby counties.

Anyway… when I first started birding I kept my life list in alphabetical order, which for a couple of hundred birds is OK. But as one gets farther and farther north of 1,000 birds it becomes increasingly difficult to keep the list accurate. So I am converting my Excel-based list to taxonomic order, which is likely to take about 20 hours. A perfect project for these stuck-at-home days.

“And what is taxonomic order?”, I hear you cry. The taxonomic order (or taxonomic sequence) of birds or any other living thing is a hierarchical list which attempts to indicate the evolutionary relationships of species. So in principle the species at the top of the list (currently the Ostriches) are the oldest and those at the bottom are the most recently evolved.

In other words, the Ostrich is the closest living relative to the theropod dinosaur ancestors of our modern birds. Which if you get a look at an Ostrich is easy enough to believe.

As you may guess, the increased availability of DNA sequencing has turned the taxonomic sequence into a rapidly moving target. Just a year or two ago the hummingbirds have made a big jump forward (or backward in evolutionary terms) and the loon family, Gaviidae, once considered the oldest species in the New World, now sits at number 23 on the list of bird orders.

So to try and future-proof the list I am trying to devise a cunning structure that will allow me to sort the list by order, family, genus and species, and yet remain flexible enough to respond to whatever new sequence the mad scientists of the bird world devise.

Whilst poring over the list of bird orders and families I was reminded of today’s bird.

The bird ticks many boxes on my checklist of bird virtue. It is quite distinctive in appearance and voice, is tricky but not too tricky to find, looks nothing like any of the birds I see closer to home, and it mates for life, which is righteous. But from a list perspective it is even better.

The Black-capped Donacobius – Donacobius atricapilla – is the only member of the genus Donacobius, and the only species within the family Donacobiidae. That makes it monotypic. Montypic refers to any taxonomic group that has only one subordinate taxon. And since there are no recognized subspecies it is actually monotypic two ways. And that is very cool.

I have only seen the bird once, and that was in Colombia on the long and empty country road that leads from Puerto Libre towards the El Paujil wildlife preserve. These are the best images I was able to take and they’re not brilliant (depth of field is an issue). But I certainly enjoyed bringing them up out of the vaults and I hope you enjoy them as well.

2 thoughts on “Lists, Taxonomy and the Black-capped Donacobius”